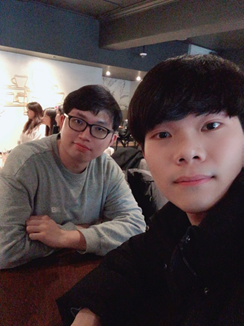 Hello, my name is Wai Shing Wong from Hong Kong who is 26 years old and majoring in Global Communication at Kyung Hee University now.

Q.2 How and when did you start living in Suwon?

I entered Kyung Hee University International Campus as a freshman four years ago, and because of the location of the campus is located in Suwon so I have been living in Suwon until now.

Q.3 What do you think are the advantages of Suwon?

Q.4 On the other hand, when did you feel inconvenient in Suwon?

I think the geographical distance to Seoul is the most inconvenient problem. Since when I go to Seoul to meet my friend, it cost me almost an hour, so it's uncomfortable sometimes. But I'm glad I don't have to transfer the transportation for few times because there's a lot of direct buses can take to most regions in Seoul.\

Q.5 Where do you go often in Suwon?

I go to Suwon Station and Gwanggyo Lake Park the most. I went to Suwon Station often because there is Lotte Department Store and Ak Plaza shopping mall that I can purchase everything I want. And when I jogged or took a walk, I usually went to Gwanggyo Lake Park since the park is huge and pretty. And sometimes there are some people busking over there, so I went to visit it very often.

Q.6 Which place in Suwon do you want to introduce to your friend in Hong Kong the most?